63 YEARS ON AND STILL ROLLING OFF THE PRESSES: MUNKMAN ON DAMAGES – ALBEIT WITH A NEW TITLE (1)

The latest edition of what, used to be called, Munkman on Damages is now hot off the press.  This is the 14th edition, the first being written in 1956.  In this post I look at the history of the book and its various editions over the years.  In the next post I will explain the major changes I have have made to the structure of the book – and the rationale for these.

John Munkman practised at the Bar in Leeds.  He qualified as a solicitor before the war and took the Bar exams whilst in the RAF and stationed abroad. (which meant he was excused attending dinners). He died in the year 2000 but kept practising up to his death. I visited him in a nursing home shortly before he died and he had lost none of his faculties. Our discussions ranged over foreign policy and the “interim provisions of the Law of Property Act 1925” (a subject upon which I listened more than participated). 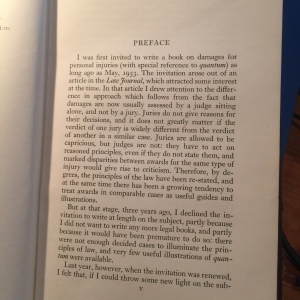 The first edition was published in 1956. It consisted of seven chapters. The seventh chapter being “illustrations of the quantum of damages”.

At the time the book was written the law of damages was in its early stages. There had been a change from assessment of damages by juries to assessment with a judge alone.  John had written an article on this in 1953 and observed:

“Juries are allowed to be capricious, but judges are not: they have to act on reasoned principles, even if they do not state them, and marked disparities between awards for the same type of injury would give rise to criticism”

THE AIM OF THE BOOK

“The aim of this book, as finally planned, is twofold. First to give a complete statement of the principles of law on the assessment of damages for personal injuries (including damages on death); secondly, to frame a broad classification of the types of cases which arise, and to offer typical illustrations of awards which can be used as general guides in comparable cases.”

DAMAGES FOR PAIN AND SUFFERING

John’s approach to damages for pain and suffering was distinct. He preferred to look at the overall effect of the injury :”total wreck” cases; “partial wreck” cases rather although there are numerous examples of particular injuries. (Loss of one eye was around £2,000 in 1956).

I suspect that you may well have to have written a book to understand the industry and labour involved in writing this work.  At that time there were obviously no computerised assistance. John work alone.  He was attempting to collate and explain  what was almost a totally new subject. (Kemp & Kemp had been written – as a book – in 1954, John had strong views about his competitor text). 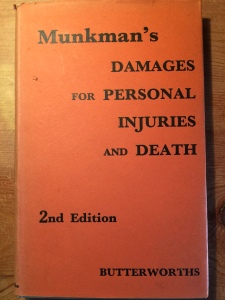 The second edition incorporated many revisions and the new Fatal Accidents Act 1959.

This edition is noticeably thicker.  John noted that numerous decisions on key points  meant “I have therefore been able to substitute definite authority for my own surmises, which, I am pleased to say, have on the whole proved to be accurate”.

In 1965 Lord Denning in the Court of appeal was giving a “strong lead” on quantum of damages. John was looking to Australia and New Zealand to assess developments and noted “I have at times had correspondence from most parts of the English speaking world, and even from such countries as Norway and Belgium whose legal systems are very different”.

The changes and additions at this stage were very large. The House of Lords had decided Parry -v- Cleaver [1969] 1 All ER 555 in relation to deductions from future earnings. There were developments in relation to future losses and loss of chance.  In relation to care John noted:

“An unsatisfactory position has arisen where, after an accident, the injured person has made reasonable and voluntary payments to a relative or other person for voluntary services: in England these have been held irrecoverable unless paid under an enforceable contract… All praise is therefore due to Megal J. who described this as a “blot on the law” and took the initiative of changing it by allowing recovery of wages lost by a wife when at home to nurse her husband: Wattson -v- P.L.A. 1 Lloyd’s Rep” 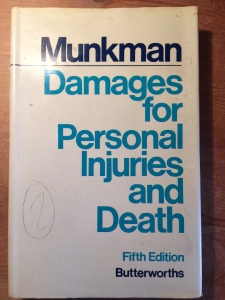 Again there were significant developments. In particular John noted:

“... the Court of Appeal has reversed the unsatisfactory line of cases under which plaintiffs were not allowed to claim nursing and other expenses unless legally obliged to pay for them.”

He went onto observe:

“The Law Commission has suggested that approved tables of expectation of life and annuity tables should be made available to judges. This is a sensible suggestion, although perhaps unnecessary. Such tables are easily available in standard diaries”  (diaries must have been different in 1973)

This dealt with the Fatal Accidents Act 1976 and a series of House of Lords’ decisions in relation to damages.

This edition dealt with changes to the Fatal Accidents Act and the introduction of bereavement awards; the effect of shortening of life on damages and supervening illnesses.

John made an interesting observation about the use of case law and “precedents” in relation to damages.

“Thirty-five years ago, when the courts first approved use of the current level of awards as a guide to damages, it was never intended that individual cases should be used and quoted in elaborate detail as precedents. The intention was that the court should take judicial notice of the general range of awards for a typical injury such as the loss of an eye, though a few cases might stand out as guidelines. (The word “bracket” has been used – it is an unsatisfactory word, verging on slang, and I prefer “range”, which is more correct as a mathematical analogy”. Now, however we are inundated with great masses of cases, many of which carry no weight because they are agreed awards or have been decided by recorders or other minor judges. There is no pattern in this mass of cases. You cannot see the wood for the trees. This is of course the consequence of the computer, where everything that is fed into it is described as “information”, though it is just as likely to be “misinformation”.

I bought a copy of this edition and used it in practice. It went missing  and I did not have a copy of this edition for many years, Casey Weston, tracked one down and gave it to me as an early Christmas present.  (The hardest part of the job she tells me was persuading the bookshop that she really did want to buy an out of date legal book).  This edition was the first after the Judicial Studies Board Guidelines were introduced.

My own personal copy of the 9th edition was a “workhorse “in the sense it was in daily use (it may have fallen apart). It was supplemented by the fact that I was in chambers with John and could call on him if I had an issue with the law (he was always generous with his time).  In answer to my seemingly inextricable tangle his reply would always be something like “The Court of Appeal decided that issue in 1957” and then to take me to the relevant case

I was in chambers with John when this edition was written. He worked on his “Model T” typewriter, eschewing all computerised aid.  He eschewed all computerised aid.  I took it as a great compliment when he referred, in a footnote, to a  book I had written on personal injury procedure as  the the “… very clear, Personal Injury by Gordon Exall”

However it shouldn’t have gone to my head. When I asked John to sign a copy for me he made it out to “Gordon Exley”.

THE ELEVENTH EDITION 2004 (and a change of author).

John died in 2000. He had an outstanding oration from the judges and bar in Leeds Crown Court and attending that was an experience in itself.  A few months later I had a letter from a firm of solicitors, John’s executors. In a codicil to his will John had expressed the wish that I take over authorship of the book – would I take it up?  It was a year or two later before the publishers felt that there was a need for a new edition and asked me to write it. (For the record my name was spelt correctly in the codicil).

Now this was scary stuff. I had written books in the past. However Munkman was a seminal work. It was cited in numerous court decisions throughout the Commonwealth (and beyond). Could I write it? How much, if anything, could I change? Would I be haunted by the ghost of Munkman if it didn’t meet his (very exacting) standards?

It was one of my then colleagues,  I think Julian Goose (now Mr Justice Goose) who encouraged me.  John would not have left the book to anyone who he felt was not up to the job.  Further he was very much his own man –  I should make the changes I felt appropriate.

So I made changes. The seven chapters in the 10th edition were replaced by 20 in the 11th. There were three chapters on fatal accidents and new sections on provisional damages and interest on damages.  I put in specific chapters on claims for loss of earnings and employment prospects, care and other heads of damage. I added an additional chapter on statutory recoupment.  I replaced the chapter on examples of awards with the JSB Guidelines.

Looking back I am surprised I had the nerve to do it.  However Lord Justice Kennedy wrote a lovely introduction. He had been in practice in Leeds and knew John.

“Everyone of my generation who undertook personal injury litigation, must feel indebted to John Munkman, not only for his excellent book on Employers Liability but also for this slimmer book which in every edition has clearly set out the principles relating to damages for personal injury and death.”

I introduced four new chapters: periodical payments; accommodation expenses; damages in anticipation of death and a chapter dealing with future loss of earnings.  My colleague Julian Goose was now a Q.C. and head of chambers and wrote the short preface,

It was a totally electronic version, available on LexisNexis. Again the Foreword was written by Julian Goose QC, this time however from his position as the Recorder of Sheffield.

This is available on technology which may not have been dreamed of when the first edition was written. It is available on a computer, a tablet and even your phone (and maybe soon your watch).

This, as is plain to see, has a change of name. After 15 years of writing it was felt that the title needed to reflect the reality of the authorship.  The foreword was again written by the same person – this time Mr Justice Goose ( I should note that Goose J has been promoted after every occasion he has written a foreword –  although  my re-reading chapter 14 on causation makes it unlikely that there is any direct link…). In the next post on the book I will set out the changes and additions in this new edition.

Tags: book, Damages, Munkman, Personal Injury
← 2019 AND CIVIL PROCEDURE, THE YEAR IN REVIEW (7): WITHDRAWING FROM ADMISSIONS (AND ANOTHER CHANCE TO PAY HOMAGE TO GUIDE DOG RALPH)
CIVIL PROCEDURE BACK TO BASICS 74: HEARSAY EVIDENCE AND SECTION 4 OF THE CIVIL EVIDENCE ACT 1995 →

© Gordon Exall, Civil Litigation Brief, 2013-2022. Unauthorised use and or duplication of the material contained on this blog without permission from this blog's author is strictly prohibited. Excerpts and links may be used, provided that full and clear credit is given to Gordon Exall and Civil Litigation Brief with appropriate and specific direction to the original content.