NEARLY LEGAL: JOHNNY DEPP: WITNESS STATEMENTS AND SELF-PROTECTION FOR THE LAWYER: “EVERY LITIGATION SOLICITOR IN THE COUNTRY SIGHS HEAVILY IN WEARY FAMILIARITY…”

A Tweet this evening, followed by a number of comments, causes me to repeat my advice on the necessity of the lawyer protecting themselves when drafting a witness statement on behalf of a client or witness.

Commenting on the reports from Nick Wallis of the ongoing libel trial involving Johnny Depp. 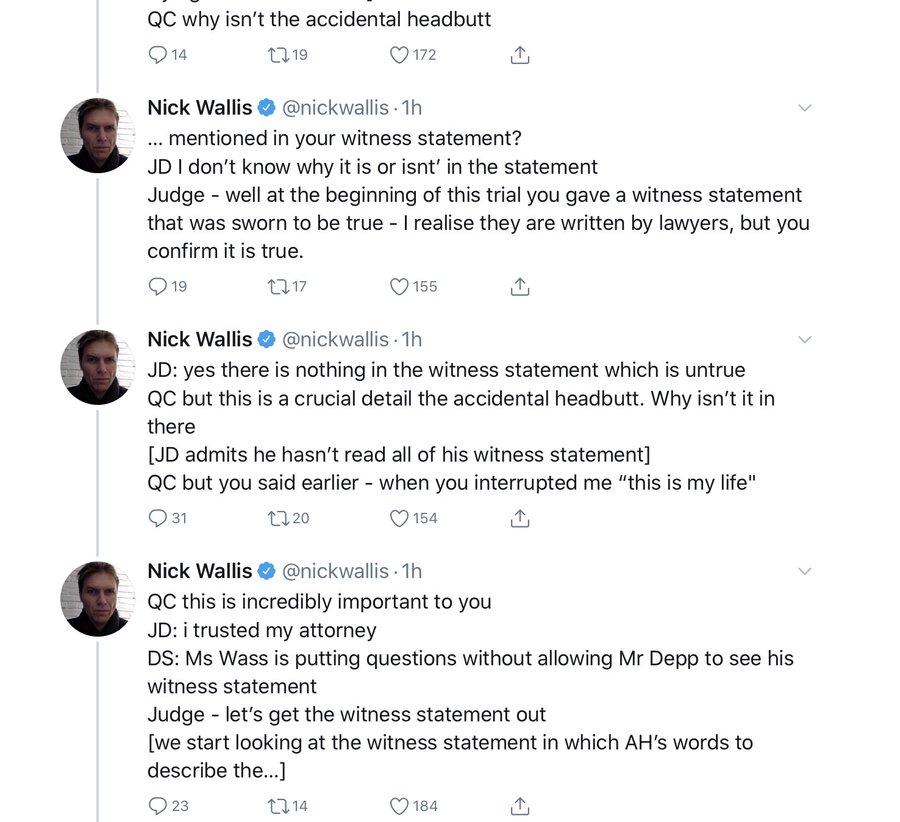 “Every litigation solicitor in the country sighs heavily in weary familiarity…”

A RECAP: WHEN PEOPLE BLAME THEIR LAWYERS FOR THEIR WITNESS STATEMENTS

THE CLIENT MAY BLAME THE LAWYER

A report in Litigation Futures illustrates the need for “self protection” by lawyers. The headline says it all “Insurance Fraudster who tried to blame his solicitor jailed for 18 months”.

IT WAS ALL MY SOLICITOR’S FAULT”

The claimant was jailed for eight months for contempt of court. He, in turn,  sought to blame his solicitor for submitting the claim without his knowledge or authorisation.

The solicitors, however, had a signed statement and recorded evidence.

However the ingenuity of a fraudster knows no bounds.

“Mr Hooper disputed the evidence by saying that it was an imposter on the call recording, that he was illiterate, and had believed the statement that he had signed related to another accident which had taken place on the same day at the same location.”

This account was not accepted by the judges. Mr Hooper was found in contempt of court and jailed for 8 months.

THE LAWYERS PROTECTED THEMSELVES

It is not uncommon for parties, and witnesses, found guilty of lying to attempt to blame their lawyers.A signed statement is essential. At an early stage, and certainly before the issue of proceedings.

This was a problem seen in Al-Saadoon & Others -v- the Secretary of State for Defence [2016] EWHC 773. An enquiry was being sought into civil deaths in Iraq.   One of the applicants relied on an unsigned witness statement.

“At around about 11am my son was in the street outside my home. He was about 10 metres from where I was watching, which was inside the house. I do not know how it came about that the sub-munition (also known as a ‘cluster bomb’) exploded and killed my son. I am not sure whether my son picked up the sub-munition or whether it simply went off when he was close by. I had a clear view of the incident.”

“I was sitting in my house with my family [when I] heard a helicopter approaching our house. Jaafar was outside playing by himself in the street whilst the rest of my children were playing inside the house. I suddenly heard a bomb close by so I immediately rushed out to check on Jaafar. … There was no military presence but I saw the helicopter flying off in the distance.

Once outside, I could see my son lying on the street. I was able to spot him immediately. As I ran over I could already see that he had been hit.”

Mr Muhyi goes on to say in the statement that he believes the British were trying to target a missile battalion of the Iraqi army, which was two streets away from his house. (I note in passing that this seems implausible, as Jaafar’s death occurred some 12 days after major combat operations in Iraq had formally been declared complete.) The witness statement exhibits a copy of Jafaar’s death certificate, which (as translated) records the cause of death as a “mine explosion”.

OTHER EXAMPLES WHERE “LAWYER DRAFTED” WITNESS STATEMENTS HAVE COME UNDER SCRUTINY

My witness statement was found to be inaccurate – but it was my solicitor’s fault.

The solicitor was blamed (by the client in Hughmans -v- Dunhill [2015] EWHC 716 (Ch) a point arose about the drafting of a witness statement when a (former) client alleged that it had largely been drafted by her (former) solicitor. The assertion was not accepted. However this judgment highlights a point that disappointed clients can, and sometimes will, blame their lawyers when their evidence is not accepted in court.  It also highlights the point that few firms have any system in place for ensuring that the witness evidence is accurate and for protecting their own position if a witness later attempt to blame them for any errors in their evidence.

The claimant firm of solicitors was suing for legal fees in the sum of £179,666.68; the defendant counterclaimed for negligence; breach of fiduciary duty and wasted costs.

THE HANDBOOK FOR LITIGANTS IN PERSON

This was written by six highly experienced circuit judges.

“Too often (indeed far too often) witnesses who have had statements prepared for them by solicitors tell the Judge that matters in the statement are not correct; they say (all too believably) that they simply signed what the solicitor had drafted for them without reading it through carefully and critically. This reflects badly not only on the witness, but on the whole case presented by the party calling the witness.” (11.1).

“I have often had occasion to remark about the failure to comply with the CPR so far as witness statements are concerned, as well as the obvious lack of skills of witnesses, and those acting for litigants, in formulating them. It is not infrequently the case that witness statements prepared by litigants-in-person are superior in form and substance to those prepared by solicitors or their agents based upon questionnaires, interviews (often by telephone) or correspondence with witnesses. It is often the case that witness statements, drafted by solicitors or their agents in good faith ( I exclude, of course, any case of deliberate intent to deceive by a witness or drafter), are signed or otherwise accepted by witnesses without any or any proper consideration of their accuracy, completeness or even truth”.

“During the course of cross-examination of some of the police officers who gave evidence on behalf of the Defendant but who were not officers of SWP it emerged that their witness statements had been drafted by lawyers. I do not find that surprising but, of course, I have scrutinised the statements with care so as to ensure that they are not attempts to re-write history.

HAVING A SYSTEM IN PLACE TO PROTECT YOURSELF

I am here repeating matters I have written on before.  However the dangers involved are serious ones.

A witness needs to know, at the very least,

Sooner of later  you are going to have a problem. A witness is going to blame their lawyer for errors or omissions in their witness statement.  Unless there is a full and clear paper trail showing that the importance of the statement has been explained and the witness given every opportunity to draft and revise their statement, you could (quite literally) end up in the dock.

DON’T BE AFRAID TO TEST THE EVIDENCE: IN THE LONG TERM THIS WILL HELP YOUR CLIENT AND YOURSELF

Finally it helps to remember that there are dishonest and fraudulent people out there who will be happy to blame their lawyers if things go wrong.  There is no substitute for testing and scrutinising the evidence and giving clear warnings of the consequences if matters appear suspicious.  Whilst it is not the lawyer’s job to pre-judge the evidence it is the lawyer’s job to give clear and firm advice on matters relating to credibility and the risks of litigation. The Bar Council Guidance is important reading in that respect.

Tags: Avoiding negligence claims, Witness statements
← CLAIMANT NOT ALLOWED TO AMEND CLAIM, OR INTRODUCE NEW EXPERT, WHERE APPLICATION TO ADJOURN BECAUSE OF COVID ALLOWED
THE CAP ON RECOVERABLE COSTS OF COSTS BUDGETING IS EXCLUSIVE OF VAT: JUDGMENT TODAY →

© Gordon Exall, Civil Litigation Brief, 2013-2021. Unauthorised use and or duplication of the material contained on this blog without permission from this blog's author is strictly prohibited. Excerpts and links may be used, provided that full and clear credit is given to Gordon Exall and Civil Litigation Brief with appropriate and specific direction to the original content.